What is R22 and Why is It Phasing Out?

Attention homeowners—It’s time to upgrade your HVAC system! The Earth is rotating towards smarter, cleaner and greener technology. And so is the law. By the year 2030 your old air conditioning and heating system will not only be outdated but nearly outlawed.  Since its creation, the R22 refrigerant has been wreaking havoc on the environment, not to mention your health. The time is now. We are being called upon by the greener powers to update our air conditioning systems and rid ourselves and our planet of toxic chemicals.

Keep reading to learn more about the harmful effects of the R22 refrigerant and why you need to upgrade your HVAC system today.

What is R22 Refrigerant and Where Does it Come From?

Attempts to harness the cold for personal use began in the mid-1700s when Dr. William Cullen published a book about evaporating fluids and the means of producing cold.

Since then, inventors, innovators, scientists and the like participated in the evolution of “producing the cold”. In 1928, three scientists created the chlorofluorocarbon (CFC) refrigerants. These produced the world’s first non-flammable refrigerating fluids, providing safety for the air conditioners used back then.

One of the compounds produced from this elemental alliance was R22, which is a hydrochlorofluorocarbon (HCFC). Also referred to as R-22 freon or HCFC-22 freon, the R22 became the standard refrigerant used in air conditioning systems ever since.

Fast forward to the future…

R22 is Damaging to the Environment

Decades later scientists discovered that chlorine, a component of both CFC and HCFC refrigerants, had been damaging the ozone layer and our health.

Once chlorine is released into the air, it has the ability to bind with organic and inorganic materials. CFCs and HCFCs are very stable, and so they are able to remain intact as they reach the Earth’s stratosphere. In the stratosphere, they are finally broken down by UV radiation where they release highly reactive chlorine atoms.

When these atoms are released, they go on to react with the ozone (O3). This creates another reaction that releases more chlorine atoms, and so a chain of reactions is created, destroying the ozone.

The chlorine atoms eventually make their way back down to the lower atmosphere where they form stable compounds. They react with methane and create hydrogen chloride. Hydrogen chloride reacts with water vapors and creates hydrochloric acid. This is the recipe for acid rain.

This not only makes chlorine damaging to our environment but our health as well.

Consistent exposure to breathing in chlorine over a long period of time has been shown to affect the immune system, the heart, the blood and the respiratory system in animals and humans. These effects include skin and eye irritation, coughing, chest pains, water retention in the lungs, and cancer.

The protocol was finalized by 1988 to involve a “phase-out” plan. This was a step-by-step plan to keep from having a severe economic impact on the private and public sectors. It gave home and business owners the option to switch to chlorine-free refrigerants once it was time to replace their current air conditioning system or heat pump.

After the year 2020, only reclaimed, recycled, or previously produced HCFC-22 can be used to service existing equipment. Until we hit the year 2030 that is. This is why, if you haven’t already noticed, the cost of the R22 refrigerant has increased greatly.

Out with the Old, in with the New

Since the R22 and other HCFC-22 refrigerants are being phased out, manufacturers of heat pumps and air conditioning equipment have redesigned their systems. The new systems will welcome the new, chlorine-free R-410A. refrigerant.

Unfortunately, due to the global warming potential of all HFC refrigerants, another amendment to the Montreal Protocol was made. There is another phase-down plan happening for the R-410A which is expected to begin in the year 2020.

In the meantime, homeowners with this upgraded system will at least be purchasing a chlorine-free option, and increasing energy efficiency at the same time.

The future looks like a single-component refrigerant called R-32. It is said to only have one-third the global warming potential as its predecessor, the R-410A refrigerant. The codes and standards for this new refrigerant are currently being updated for mainstream use, which is expected by 2020.

What This Means For Home and Business Owners

While the phasing out of the Ozone-depleting HCFCs is a step in the right direction for salvaging our environment, it will be a costly step for business owners and homeowners.

With the phasing out of the R22 refrigerant and now the R-410A refrigerant, business owners who rely on air conditioning systems installed prior to 2015 will have a very expensive time maintaining and having those systems serviced.

The R22 refrigerant is already scarce and very expensive, and it won’t be too long until it is banned completely from use. This means that even an HVAC specialist won’t be able to recharge your system, let alone repair it.

For homeowners as well, air conditioning systems will have to be completely replaced in order to upgrade to the up and coming eco-friendly alternative. This could pose an expensive issue for those who have already made the costly upgrade to the R-410A refrigerants.

Let’s just say the transition from the R22 to the R-410A refrigerant is like converting a diesel engine to a gasoline powered engine. Major changes have to be made including replacing the R22 compressor, evaporator and units, and in some cases, the copper lines that connect these components.

An integral part of this entire process is removing all of the moisture from your entire HVAC system and making sure their are no leaks. Leaks will make it next to impossible for the specialist to properly drain and dry the system. Any repairs that are needed will add to the overall cost of this conversion.

Not to mention, the process is not a quick one. Depending on the size of your system, this could take anywhere from hours to days.

As of right now, if you have an HVAC system running on R22 refrigerant that is in good condition, you should be fine until the final ban is placed and you have to get a whole new HVAC system.

For those who have already made the R-410A conversion, don’t worry—not all is lost. 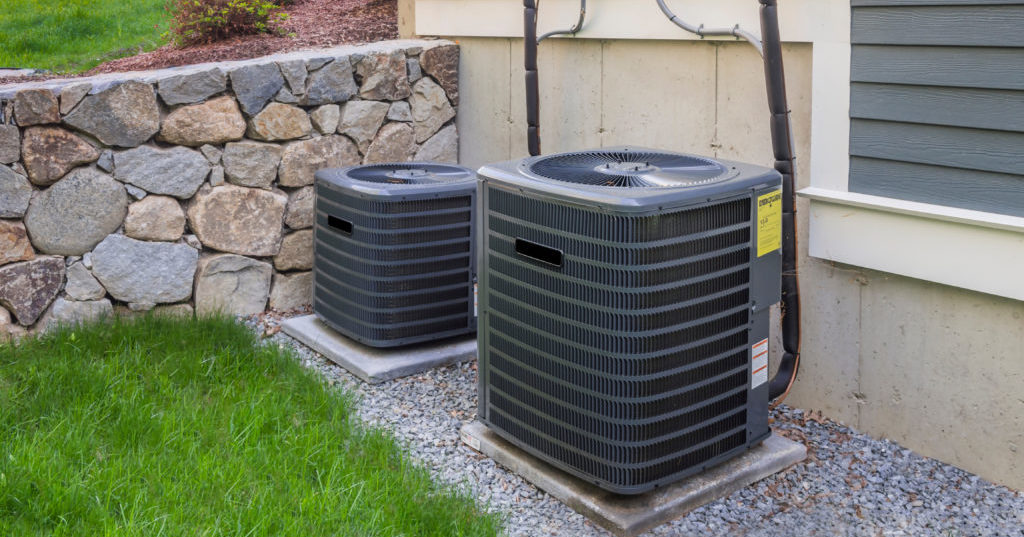 Upgrading Your HVAC System Will Pay Off During Tax Season

Aside from the fact that legally, all home and business owners will have to upgrade to the new eco-friendly systems and refrigerants, there is an upside to the costs you will endure.

There is a new tax law that allows business owners to immediately expense their air conditioning, heating, and ventilation system.

Under this new tax law, you can offset the cost of a whole new HVAC system for up to $5,000 or more. And that’s just on an average sized system. Larger commercial systems will have an even more substantial value in savings.

Before this new law, you would have to take into account the depreciation of your HVAC system for up to a period of 39 years—despite the fact that they don’t even last that long. Now you can quite literally write off each and every component of your new HVAC system.

For homeowners, the tax situation is slightly different in that you technically can’t write off your entire new HVAC system and its components. However, you can claim a tax credit.

Claiming Your Tax Credit for Your New AC System

There are two criteria for qualifying for a tax credit on your new HVAC system:

1. Energy efficient requirements. When you choose a new HVAC system for your home it must be rated at the highest energy efficiency tier.

Of course, this may be circumstantial, especially if you rent your other properties for at least six months out of the year.

It doesn’t seem like a whole lot compared to what business owners may get, but your new HVAC system can cost anywhere from $500 to $4,000. So depending on which equipment you choose for your home, this tax credit may be just enough.

In order to claim your tax credit on your federal tax return, you need to use the 5695 form. This form will allow you to enter the property costs of any qualifying energy-efficient improvements. This can include unit assembly and installation as well.

The IRS also requires this form to be in addition to a 1040EZ form or a 1040A form. Otherwise, you won’t be able to claim your tax credit. Your new AC unit will also count as a standard deduction rather than an itemized deduction.

What are the Benefits of Upgrading My HVAC System?

Aside from doing your part to save the planet and the tax credits, there are other benefits to upgrading your HVAC system:

The U.S. Department of Energy estimates that about 42 percent of homeowners’ power bills come from heating and cooling. It’s one of the greatest expenses of being a homeowner.

The upgraded air conditioning systems with the R32 refrigerant use 20 percent less refrigerant than the older systems. This means lower energy costs for you, which is one of the major benefits of this upgrade.

Another major benefit of this upgrade? Your health. We spend most of our time indoors these days, and with the old systems, the air inside our homes is actually up to five times more polluted than outdoors.

Now you can breathe easy knowing that the air inside your home is fresh and clean and that you’re not only benefiting the planet, but your bank account as well.

Get Off the Fence!

R22 refrigerant is in the past. The future is green, and it’s here.

With all the great benefits that the new and energy efficient compliant HVAC systems provide, don’t wait to upgrade yours.For all of your questions, comments, and concerns involving plumbing, HVAC systems, electrical issues, and commercial services, don’t hesitate to contact us today!

Never lose power again with a new whole home generator, plus pay no interest for a year!

If you want to keep your HVAC system in shape, this guide can help. Here are spring HVAC maintenance tips for homeowners.

Common AC Problems and How to Fix Them

It can be a real struggle when your air conditioning starts malfunctioning. Learn more about common AC problems and how to fix them.

Buying an HVAC system for your home can be quite intimidating. Nevertheless, it is an important decision that’ll affect your comfort level and monthly expenses for years to come. According to the U.S. Energy Information Administration, 87% of American homes are air-conditioned. Additionally, the vast majority of these households use central air systems. However, few […]

As technology becomes more and more advanced, smart home installation systems are increasing. Here are the 7 benefits of smart thermostats.