Jimmy Hiller, founder & CEO of Hiller Plumbing, Heating, Cooling & Electrical, was named among Nashville Business Journal’s 2018 “Most Admired CEO’s and Their Companies” in the 100-500 employee private business category. The 2018 award marks Hiller’s third recognition in four years, after previously winning in both 2015 and 2016.

On Monday, November 5, at the “Most Admired CEO’s and Their Companies” Awards Banquet in Downtown Nashville, the award was presented via live announcement to the honorees and their peers. Hiller was selected as a finalist from a pool of nominations from the public, then voted as a winner by a panel of previous honorees. 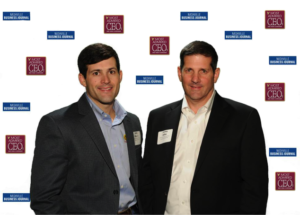 The “Most Admired CEO’s and Their Companies” Award honors the “business community’s most-esteemed CEOs”, according to the Nashville Business Journal. Jimmy Hiller continues to be an ideal recipient for this award for his unwavering dedication to his employees and the Middle Tennessee community.

“I am honored to receive the ‘Most Admired CEO’s and Their Companies award again this year”, remarked Jimmy Hiller, founder and CEO of Hiller Plumbing, Heating, Cooling & Electrical. “It is especially meaningful”, he continued, “To be recognized by our peers for our efforts to serve the Nashville community year after year.”

Launched in 1990, Hiller has grown to include over 480 trucks, 15 locations, and more than 630 employees across the southeast. Hiller, among the top 1% of private companies on the Inc. 5000 list, was named to Nashville Business Journal’s List of Top 50 Fastest Growing Private Companies earlier this year.