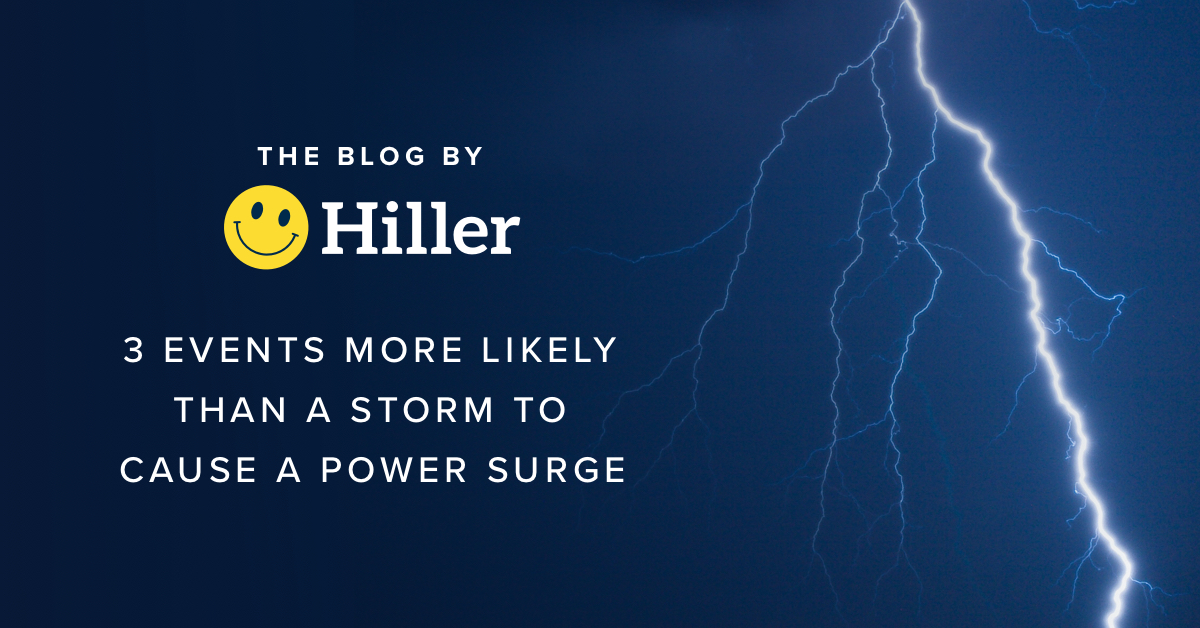 More than half of household electrical surges come from the people living in the home. Sure, storms can cause a power surge. But what’s more likely? Lightning striking or these three cautionary tales…

Curly Sue has straight hair. It’s like when you call your short friend Tall Tony, your tall friend Short Tony or your average height friend Weird Tony. Anyway, one Friday afternoon Sue decided to curl her hair. She finished with her curling iron and no, nuh uh, not gonna work.

Sue immediately grabbed the straightener to undo her new do. Even then, something wasn’t quite right. Time to wash it, dry it and try again. She plugged her hair dryer in. All the lights went out. See, Sue was getting ready to go out. Like OUT out. Plugged into the same outlet, she had her portable DVD player playing Bring It On’s final cheer off and a 6-CD changer full of Nelly, Eminem, Ashanti, J Lo, Nickelback and uh…another Nickleback CD.

We’ll let you decide what’s more regrettable: the 2nd Nickelback CD or Sue’s reliance on one outlet to support all those appliances. Here’s the easy fix: use more outlets or unplug something when not in use. Mission accomplished. As for Sue’s hair, try a hat maybe.

One day, in the hot summer of 2009, Timmy’s phone ran out of juice from looking up electronic consumer reports on the popular consumer report website ConsumerReports.com. He plugged his phone into the wall. Problem was, he had already plugged an iPad, iPod, iPod Nano and iPad Mini into the same place, where the microwave was also plugged. Oh, and a Zune. He also had a Zune.

Sure enough, Timmy’s technology addiction triggered a power surge in his home. His iPods and iPads were ruined. His microwave? Toast. If only he’d used multiple outlets.

During a particularly blizzardy day, Hal can’t get warm. His heat is on, but he hasn’t serviced the unit in some time. Maybe a cup of tea will do the trick. Hal slides to the kitchen, fills up his electric tea kettle and waits. Apparently never hearing the phrase “a watched electric tea kettle never boils”, Hal sits there. Freezing. He grabs his upstairs electric blanket and his office space heater. Plug. Plug. The water is warming, not hot quite yet.

All this waiting around makes Hal hungry. He grabs the toaster oven. Plug. He pops in a sliced bagel, turns the dial and waits. Apparently never hearing the phrase “a watched toaster oven never toasts”, Hal sits there. He’s still not warm enough.

Hal has an idea. He takes a t-shirt and tosses it in the dryer and hits start. Before his shirt is warmed and his tea kettle is boiled and his bagel toasted, all the lights and outlets in Hal’s house die.

Think of your appliances. An A/C unit. A pool pump. A washer, dryer. A home theater system. The average North American home faces five or more surges a day. That’s more than 2,000 every year. Most happen when large appliances switch on and off putting a strain on your electrical system.

Contact us today to assess what level of surge protection you need for your home and office.

What Causes Flickering or Dimming Lights and What to Do Next

How to Handle a Lasting Electrical Short Circuit

Why You Should Consider a Standby Generator for Your Home

Power outages can last for hours, or even days. Read our guide for information on how getting a standby generator can make power outages more manageable.